5G extends its scope beyond consumer only to many new vertical and enterprise markets. Thanks to its flexibility and improved performance, 5G opens the door to many industrial applications.

When researchers and engineers began developing 5G in 2012, they began to look at use cases. The primary motivation for launching a new generation of wireless technology was insufficient spectrum. Most industry analysts predicted an explosion of data traffic that would result in saturation of existing spectrum resources.

Another motivation arose from the expected tremendous growth in the number of connected devices including many new device types for machine type communications (MTC) and Internet of Things (IoT) applications. This expansion gave rise to a variety of requirements that 4G missed. Here’s how 4G and 5G compare in relation to IoT.

5G’s definition took the shape of a now famous triangular icon with three sides depicting the three main 5G components. The triangle was subsequently modified, reused, and adapted by many companies throughout the wireless industry. Figure 1 summarizes the three 5G use cases. 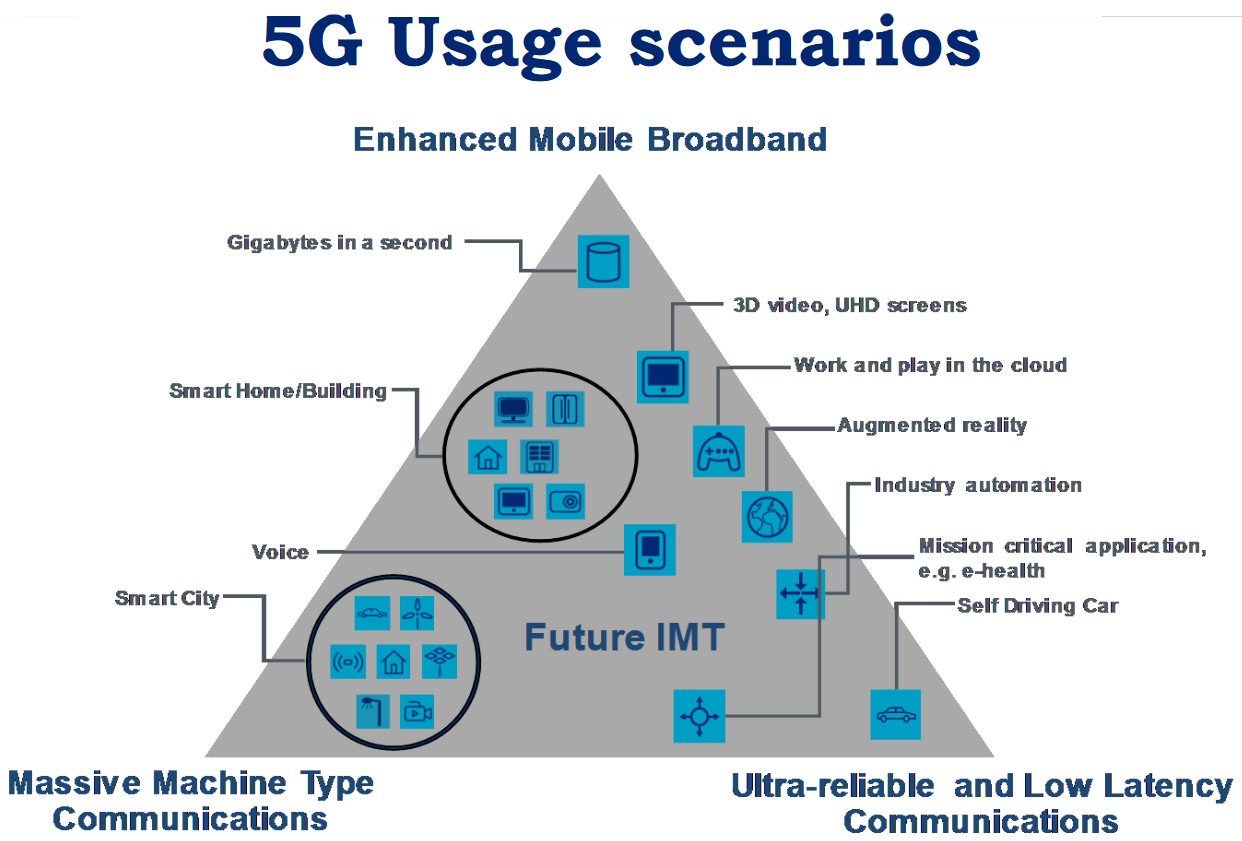 With so many use cases and requirements, 5G needed versatility and support for these generally non-compatible requirements. These requirements were key in driving innovation in 5G design.
The new requirements imposed on 5G include not only a new radio (NR) interface. 5G adds an evolution in core network principles: convergence of wireless and wireline systems, new radio access networks (RANs) and new telecom network core architectures. These aspects are beyond the scope of this article.

5G design principles
To meet the three main use case requirements, 5G NR needed more flexibility and higher efficiency than 4G while providing more capacity, higher speed, and lower latency. To improve the capacity, concluded Shannon, one must either increase the bandwidth or improve the signal-to-interference-and-noise ratio (SINR). [Ref. 1]

4G and 5G differ in their use of spectrum. To increase the bandwidth for cellular, regulatory agencies look to repurpose spectrum from other uses. In the U.S., for example, frequencies formerly used for broadcast TV are not allocated for cellular. While 4G resides mainly below 3.8 GHz, 5G uses bands below 6 GHz (frequency range 1, FR1) and 24.25 GHz to 52.6 GHz (FR2).

Many of 4G’s principles continue in 5G. For example, OFDM, OFDMA, and MIMO all came from 4G, and the protocols are almost identical. [Ref. 2,3,4]

LTE vs. 5G
Because flexibility was deemed necessary to meet the needs of a wide variety of new use cases, the time-frequency grid must accommodate different numerologies µ (from 0 to 4), corresponding to the subcarrier spacing (SCS) of OFDM symbols. Numerology 0 refers to a subcarrier spacing of 15 kHz (same as LTE). Numerology 1,2,3 and 4 correspond respectively to 30 kHz, 60 kHz, 120 kHz, and 240 kHz), resulting in different slot durations (the number of OFDM symbols in a slot is kept constant at 14). Table 1 summarizes the numerology. With this flexibility, the NR frame design can accommodate low latency traffic (using very short slot durations), as well as variety of frequency bands (the higher the frequency, the higher the SCS).

4G LTE protocol has two main frame structures to deal with: FDD and TDD. In contrast, 5G NR has 56 slot formats currently defined’ they operate in either duplex mode, FDD, TDD, or even in self-contained slots that contain downlink and uplink symbols. Such self-contained slots enable fast communication on the air interface, minimizing the transmission time interval (TTI).

Beamforming shows another difference. In 5G NR, all signals are beamformed, which provides better reach and limits the overhead (pilots are transmitted only when needed). The pilot structure is flexible, allowing adaptation to the channel characteristics. Front-loaded pilots let channel estimation occur first, and then demodulate received data symbols on the fly, for faster demodulation.

5G also introduces low density parity codes (LDPC) as forward-error-correction codes for the data channels and polar codes for the control channels. Though polar codes are quite novel, LDPC were already being used in Wi-Fi.

While NR design didn’t introduce anything revolutionary, it is a better version of 4G. It can deal with larger bandwidths and higher frequency bands that LTE.

The first definition of 5G NR in 3GPP was made in the context of Release 15, completed in December 2017. For this release, the focus of standardization was on the eMBB use case, with some enablers for URLLC. 3GPP identified solutions for mMTC as LTE-M and NB-IoT, which were defined in an earlier release, Release 13. This raises more general questions about support of IoT in 5G.

5G IoT support
4G LTE introduced MTC, which refers to two non-smartphone objects communicating with each other. MTC was originally considered only for low-data-rate devices and applications, generally known as IoT. 5G NR opens the door for communication of more sophisticated and higher data rate objects that must meet stricter latency and reliability requirements. This corresponds to the URLLC side of the ITU triangle (Fig. 1). These more demanding objects are sometimes referred to as industrial IoT or critical IoT objects to distinguish them from low profile IoT objects, mMTC.

In Releases 14 and 15, 3GPP improved LTE-M and NB-IoT from their initial release. When 3GPP submitted its proposal to ITU for 5G, it submitted NR for eMBB and URLLC, while LTE-M and NB-IoT were accepted as already meeting the requirements for the mMTC aspects of IMT-2020.

3GPP introduced efficient solutions to connect classical objects. Depending on the application, the user can select the most appropriate cellular technology to connect objects, per application, as illustrated in Figure 2. LTE-M and NB-IoT are officially part of 5G. Figure 2. Cellular IoT offers a solution for every use case.

How can we ensure that all deployed objects using LTE-M, NB-IoT, or even LTE Cat 1 have support going forward? In many applications, IoT connected objects are expected to live in the field for many years (utility meters) and some were originally designed to operate with a 4G core network. The 5G core brings improvement, especially with respect to high-end quality of service, but does not bring any specific benefit to low-end IoT (and more problematic, some power optimization features were not supported in the Release 15 5G core network). There are three options for this problem:

Option three is the most realistic.

5G: Critical and industrial IoT
5G NR brings significant improvements in latency and data rate compared to 4G, and these improvements are key in meeting the strict requirements in vertical markets such as factory automation (industry 4.0), transport, energy, or entertainment, including augmented and virtual reality. Most of these improvements are defined within the context of the URLLC side of the 5G triangle.

Cellular connectivity, especially in harsh industrial environments, has an inherent advantage over Wi-Fi and even wired technologies. Wi-Fi is less secure and more susceptible to interference than cellular by design and wired technologies are less flexible and more difficult to update or change in a factory layout. Thus, 5G will be a key technology for industrial applications, especially when deployed as a private network where the network owner has full network control.

In Release 16, 3GPP introduced a dedicated working group to address Industrial IoT. The work item [Ref. 5] introduced improved reliability thanks to enhanced packet data convergence protocol (PDCP), an upper layer of the protocol stack) duplication, mechanisms to prioritize traffic between UEs and within a UE, and a means to support time sensitive networking (TSN) [Ref. 6].

TSN is a technique introduced by IEEE 802.1 group for an Ethernet wired network that provide deterministic transmissions by synchronizing various equipment components to a single master clock. [Ref. 7] Mechanisms to ensure deterministic delays and synchronization were defined by IEEE and the objective of 3GPP was to adapt these mechanisms to the wireless and 5G world.
Industrial IoT and its subsequent ongoing work item in release 17 called in 3GPP Enhanced IIoT complements URLLC and is expected to fully support the most stringent requirements of critical and industrial connected objects. [Ref. 8]
5G will not replace 4G. Both will coexist for a long time, especially for the LPWA side of IoT for which LTE-M and NB-IoT will remain the solution of choice. With 4G LTE and 5G NR, 3GPP defined a unified toolbox to support professional IoT and a wide range of applications from very simple, low data rate types of connected objects to high performance industrial and critical IoT. Dr. Guillaume Vivier graduated from Telecom Paris Tech and received his PhD degree from Sorbonne University. After various positions in Alcatel and Motorola, he joined Sequans Communications to drive innovation into products. Early 2014 he initiated 5G activity to anticipate the ongoing development of Sequans 5G products. As CTO, he is constantly identifying new technological trends and opportunities to support Sequans future growth.