Do you believe in ghosts? And do you believe video gaming equipment can find ghosts lurking in your house? That’s the premise of some YouTube videos that use the Xbox Kinect gaming system to display what they have claimed are ghostly apparitions.

That premise has been thoroughly debunked by several YouTubers, perhaps most notably Ken Biddle on behalf of the Center for Inquiry. And it turns out that only version one of the Kinect launched in 2010 will generate what some have claimed are ghostly figures. In this teardown we’re going to look at the Kinect version two to explain why the ghostly figures you see on some YouTube videos only appear when using the initial version of the Kinect and generally not when you use this later model of the Kinect.

The Kinect was Microsoft’s answer to the Nintendo Wii which tracked the movements of someone standing in front of it to allow interactions with video games. The Kinect version one uses an infrared laser diode to project what’s called a speckle pattern—basically random dots–on objects in front of it. An infrared camera picks up the patterns and uses them to detect both depth and the presence of moving objects such as your hands as when you interact with a video game.

The Kinect version one detects distortions in the shape of the speckle pattern for discerning movement and depth. Once it decides it sees a figure, it compares what it sees to a database of typical human movements to construct its best guess as to the shape and movements of people in its camera’ field of view. The result is a stick figure which is normally used as the basis for an avatar in the Kinect gaming environment.

And therein lies the Kinect’s role in ghost hunting videos. Occasionally the Kinect version one confuses an inanimate object for someone moving in front of its camera. When that happens, you can see it construct a stick figure on the display that doesn’t correspond to any humans in its field of view. And various YouTube videos have implied or claimed these stick figures are ghosts.

What’s actually happening is that the Kinect software is getting confused for various reasons. One obvious reason is that the Kinect box itself may be moving. In a normal gaming environment, the Kinect is fixed. So it assumes that anything that changes location in front of it is in fact moving. But when the Kinect itself moves, as is often the case when ghost hunters traipse around supposedly haunted houses, that is no longer the case and you can end up with stick figures constructed from inanimate human-like shapes such as vacuum cleaners, chairs, or coat racks.

Kinect confusion is particularly likely to happen when there is a lot of furniture in the scene, as is often the case in ordinary residences, because more furniture creates the chance for more infrared reflections and thus more opportunities for the Kinect to be fooled by some of the sheer number of reflections coming back from the scene it sees.

And that brings us to the physical architecture of the Kinect version two. The interesting thing about these ghostly apparitions is that if you look at the same scene with a later version of the Kinect, the ghostly stick figures disappear. The reason is the newer version of the Kinect uses a better method of discerning moving objects. It uses 3D time-of-flight techniques that illuminate the scene with a modulated infrared light source, not a speckle pattern. If you look at the Kinect version two laser light with an infrared camera, the difference between the version one and version two patterns become obvious.

In version two of the Kinect, the phase shift between the infrared laser diode illumination and the reflection serves as a measure of distance and depth. To detect phase shifts between the illumination and the reflection, the light source is pulsed or modulated by a square wave. One benefit of the technique is that it can resolve different depths in the scenes the Kinect sees more accurately than the first version of the Kinect, which helps explain why you don’t see version two Kinects conjuring up ghostly images.

The hardware in the version two Kinect that’s used for detecting movement also differs significantly from the earlier version. Instead of a single infrared diode, the later version of the

Kinect uses three. And that brings us to the Kinect version two teardown. The case comes off after the removal of a few Torx screws. The Kinect components, mainly the laser diodes, generate a lot of heat, so like the first iteration of the Kinect, the Kinect version two contains a five-volt dc fan made by Nidec, and the beefy metal heat sink that doubles as the frame to which most of the other Kinect components attach. That includes the stand which doubles as the housing for the microphone array the Kinect uses for voice commands.

With the cover removed you see a plastic cowling that provides structural support for the fan and power cord as well as for some of the other Kinect components. Removing it allows access to the heat sink and the main circuit board. The board holds the main processor, a Microsoft branded IC that seems to have been fabricated by the chip company STMicroelectronics. Near the main processor we find a 64 Mb serial flash chip from Macronix, a Samsung DDR3 SDRAM chip, and two On Semiconductor power management chips.

On the other end of the board sit two Texas Instruments 4.5 V to 18 V switching ICs, an ON Semiconductor constant-current regulator for high-power LEDs, and an ON semiconductor 60-V MOSFET. There is also another small PCB on the Kinect containing the LED illuminating the logo on the front of the device.

The infrared emitters, the infrared camera, and the regular camera all sit on small PCBs that mount to the Kinect heat sink. As on the earlier version of the Kinect, the two cameras are about the size of something you’d find in a webcam. The IR camera PCB also contains another Texas Instruments 4.5 to 18 volt synchronous step-down switching IC.

The three infrared laser diodes sit on a PCB along with circuitry covered by two metal shields used to minimize EMI. Beneath the shields lie an ON Semiconductor fanout buffer and a laser diode driver that seems to be from the Intersil subsidiary of Renesas. Also there is a low-voltage comparator from Texas Instruments, and a digital temperature sensor with EEPROM from Microchip.

And that’s about it for the Kinect version two. Thanks to its improved infrared depth sensing, you don’t have a ghost of a chance of seeing moving artifacts that aren’t really there. 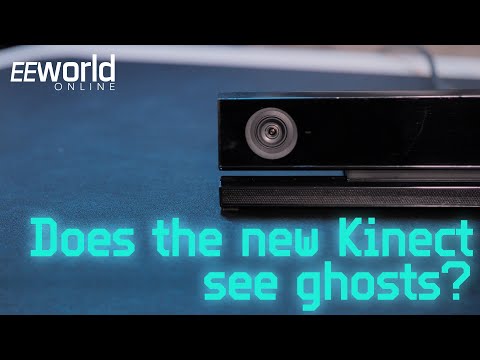